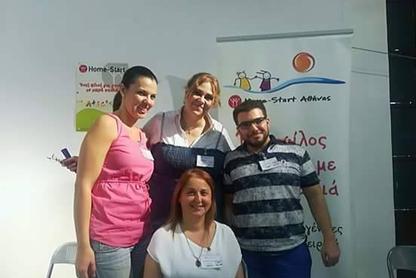 Home-Start came to Greece following a chance meeting between Tanya Barron, CEO of Home Start International, (now Home-Start Worldwide) and Evi Hatzivarnava, then director of the Institute for Social Protection and Solidarity in Greece. Home-Start was initially launched under the auspices of the Institute itself.

A pilot Home-Start scheme was set up in Thessaloniki in 2004. Full schemes followed in Volos in 2006, in Athens in 2011 and in Piraeus in 2014, although the Volos scheme has since closed. The schemes provide home-visiting services with volunteers and collaborate closely with the local authorities and other local agencies. In 2016 they served 46 families and 75 children.

The national organisation, Home-Start Hellas, was founded in 2008. The Board Members have impressive credentials in family support and social research and extensive experience of NGOs.

Home-Start Hellas plays a role in national initiatives to promote children’s rights. Accordingly, in 2016, the Board helped in the development of a national position paper on child protection, led by the Greek Ombudsman for Children and the Institute of Child Health. The Board has also collaborated with local government agencies and other NGOs to develop common action plans to promote children's rights through the development of educational and play activities which include parents. And Home-Start Hellas participated in the seminar ‘’Child Rights in Practice and Research - Realising children’s rights through empowering parents and families”, organised in December 2015 in Galway, by Eurochild, UNICEF, UNESCO and the Council of Europe.

In 2014, Home-Start Athens and Home-Start Hellas received a European Economic Area (EEA) grant to develop a new Home-Start scheme in Piraeus. This funding has now ended and alternative sources are being sought. Presently Home-Start Athens staff support the Pireus scheme. This grant also allowed the development of tools to better portray the impact of Home-Start work on families and volunteers. The results of this project were presented at national meetings and conferences and were well received, helping to raise Home-Start’s profile at a national level. A second EEA grant, approved in July 2016, has allowed exchange visits with Home-Start Norway, to further develop guidelines on Home-Start support for families of children with disabilities.

Evi Hartzivarnava Kazasi, National Coordinator, has served, between 2011 and 2018, as Chair of Home-Start Worldwide.

Quote from a parent: “My life and that of my children significantly changed. They are more well behaved and they respect me. I feel that I have solutions”.

Quote from a volunteer: “I feel fulfilment because I offer something according to my capabilities”